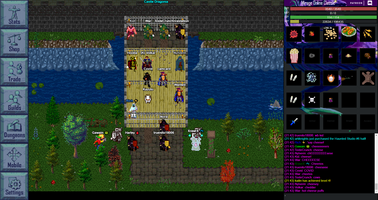 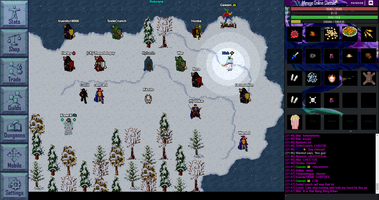 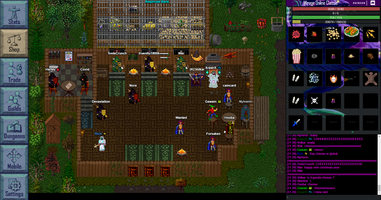 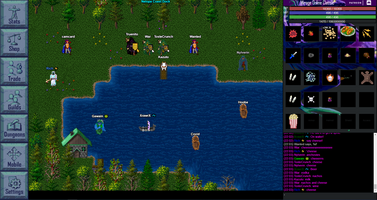 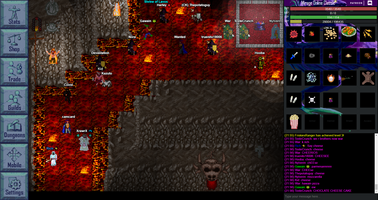 It's hard to believe our little free browser MMORPG, Mirage Online Classic, is a year old today, but looking back at the journey it's crazy that we even made it to this point.  Given the timing, I thought now would be a good time to touch on the history of the game, how we got here and what is in store in the future.  Don't worry, I'll include pictures.

Consty developed the original Mirage Online in 2001 after playing a boatload of EverQuest, Ultima Online, Graal Online and a not as well known cult classic made by Justin Schumacher in 1999 called Odyssey Classic.  As you can see from the image below, using artwork from games like Final Fantasy was not as frowned upon as it is now.  Little did we know this game would take off and eventually become one of the most used open source engines of the first decade of 2000 spawning hundreds of new programmers.  Rest in peace Visual Basic 6.  We love you.

Mirage's source was eventually released to public domain and transformed into several entities from Playerworlds to Konfuze to Elysium to Eclipse.  The site took on several names, but I will always remember it as the Touch of Death Forums.  Hundreds of thousands, if not millions, of posts from aspiring programmers.  For a trip down memory lane, check out this Wayback Machine archive from March 10th, 2012.

Around June of 2013, Consty began working on a java-based version of Mirage.  This is also when our two-person development team reconnected after a decade of life.  You'll need to remember that when Mirage Online took place we were in high school and college so we had a lot of catching up.  The project was eventually scrapped for several reasons, but the groundwork for MOC was established in this reconnection.

Consty began working on developing the game in a more viable language, HTML5.  Initially, this was something to pass the time and was worked on casually.  Slow and steady has been the team's motto.  "I have no interest in stopping and plan to make incremental improvements to it over time and get it up to snuff" is an actual email exchange quote and a great summary of how we got to the modern version.

With the engine becoming viable, a world was developed after purchasing some graphic assets.  The first continent was created and the engine started becoming more advanced.  As time went by, the decision was made that because so many games had a similar art style we needed to pivot to something else.  With the original world and art in public domain, we shifted to utilizing Odyssey Classic's visual shell for our new engine.  In retrospect, we had come full circle to what inspired this journey 16 years prior.

For the next two years, when we had free time we would work to advance the engine with a focus on making it playable on any computer capable of running a web browser.  Eventually, we opened up the world to a small group of players.  Inevitably, lots of bugs & exploits were found.  There were a few times where the time commitment to fixing things were overwhelming.  The game was shut down for several months in an attempt to improve security and prevent the same mistakes from happening again.  We also tested out adding the game to Facebook's now cancelled embedded game section.

We learned a lot during the Beta stage, but it is easy to remain in early access, alpha or beta status hell for eternity.  The band aid was ripped off on Dec 30th, 2020 we moved to full release.  The engine will always be in development mode with Mirage Online Classic as the original proof of concept.  Our labor of love was out there, for better or worse.

As more players began finding the game, we were faced with new issues that every developer has to face, such a botting, racism, clones and review trolls.  Running a MMORPG in 2020 was different than back in 2001.   WoW, GW2, OSRS, and hundreds of other games changed the genre.  We had to balance modern gaming with our retro ambitions.  This is where the real development work started.  What was or wasn't working?  With the help of the community, we have developed our own unique niche within the MMORPG space.

We will continue to expand the capabilities of the Mirage browser engine for the foreseeable future because we are just as enthusiastic about the game as our players.  The support of the community has been overwhelmingly positive and passionate.  It has been encouraging that without any paid promotion our player totals continue to grow with our high concurrent player count being set in early December.  There is so much on our roadmap that we haven't even scrapped the surface of yet.  Below are a few of the key aspects we would like to implement in the next year.


i hope i don't get muted